Like Bitcoin, Smesh—the Spacemesh native coin—will be issued over time according to an exponential decay function with a hard supply cap. Issuance will be roughly 7.3x more gradual than Bitcoin, with a half-life of around 29 years. At ten years post-genesis, 25% of total issuance up to that point will be reserved for early investors and builders. However, issuance will continue for a long, long time after that, and eventually this share will fall to 6.25% of total supply. The remaining 94.75% will be issued permissionlessly to Smeshers (Spacemesh miners). Spacemesh does not have a traditional premine: on the day the network goes live, and for the first year thereafter, zero coins will be issued to early supporters. The only coins in circulation and tradable for the first year are those that were mined permissionlessly by Smeshers. 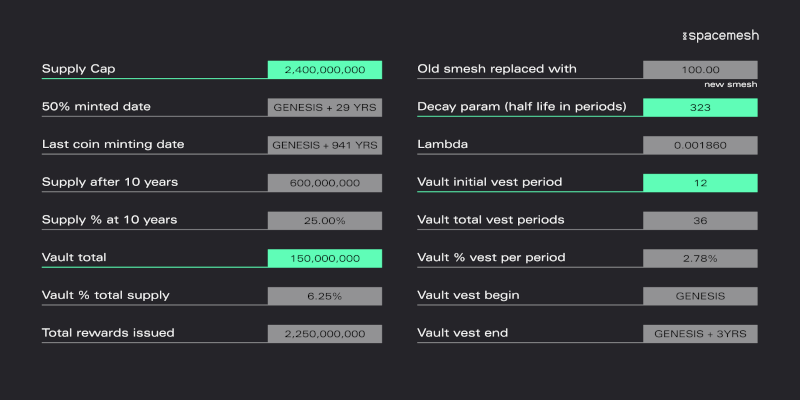 As we approach the launch of the Spacemesh mainnet, we are excited to announce our economic model, as well as our motivation and some background information on the process of designing the model. From the start, our goal has been to design an economic model that is 1. Simple, transparent, and predictable, 2. Credibly neutral, and 3. Scalable, in the sense that it leaves plenty of value on the table for network participants far into the future.

In setting out to achieve these economic goals (as in so many other areas of the project) we are primarily inspired by Bitcoin. While there will never be another successful fair launch like Bitcoin, we believe we’ve come as close as possible to this ideal. We’ve started with Bitcoin’s economic model, and made three important tweaks.

The first is that, rather than having abrupt “halvenings”, Spacemesh issuance decays predictably and gradually with every layer. The second is that, whereas Bitcoin has a half-life of about four years, the half-life of Spacemesh issuance will be about 29 years. This means that, while the last full Bitcoin will be issued around 2140, the last Smesh coin will be issued hundreds of years after genesis, in around 2899. The third is that a small portion of Spacemesh issuance, 6.25% of the total, flows into “vaults” for early investors and builders, with multi-year vesting. 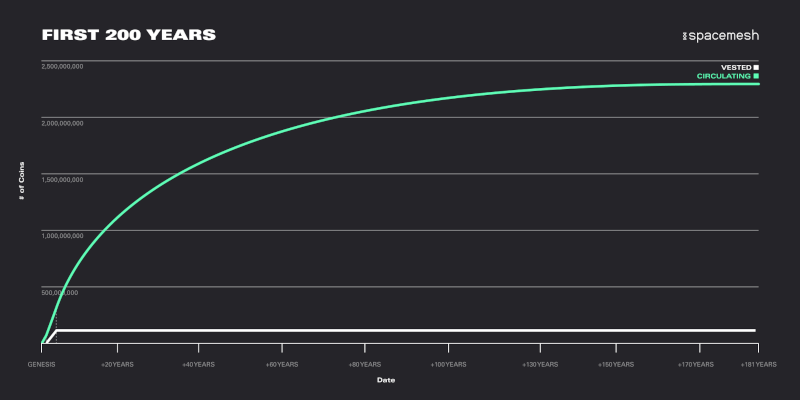 Down the Rabbit Hole

There is a worrying trend among blockchain projects. With more established projects like Ethereum, the number of full nodes has dropped precipitously due to the increased difficulty of running one of these nodes. At the same time, novel platforms like Solana have severely sacrificed decentralization in exchange for niceties like higher throughput and faster block times.

The one exception is Bitcoin, which continues to see growth in node count. As Bitcoin has demonstrated, decentralization is not something you get for free. It’s something you have to constantly strive for. Moreover, it’s clear that there’s no way to maintain nice properties such as permissionlessness and censorship resistance without a meaningful, sustainable commitment to decentralization.

The Spacemesh project and technology have evolved a great deal, but our vision, values, and goals have not changed. We’re committed to building the most decentralized cryptoeconomic platform the world has ever seen. Properties like fast block times and high transaction throughput are nice to have, but they cannot come at the expense of decentralization.

What enables this in Spacemesh is good economics, which is essential for three reasons.

Firstly, good economics allows us to ensure that any user, anywhere in the world, using only their existing, consumer-grade computer and internet connection, can participate profitably in mining without needing specialized hardware or technical expertise. These users, which we call Smeshers, can permissionlessly generate economic value for the network and for themselves through mining. By instituting a simple, scalable economic model, we ensure that this will remain possible for a very, very long time.

Secondly, in order for the Spacemesh network, project, and community to reach its full potential, it’s absolutely essential that new contributors, whether Smeshers, developers, investors, community leaders, or those in other constructive roles, be fairly compensated for their contributions. As much as possible, this should occur in a manner that’s sustainable and credibly neutral. And without a healthy, active, growing ecosystem of contributors, we cannot hope to achieve any of our other goals.

Finally, in order to maintain credible neutrality, it should be difficult to impossible to change the economic model. By staying as close as possible to Bitcoin’s simple, tried-and-tested issuance model, we believe we’ve maximized the likelihood that our economic model, too, will stand the test of time and will not need to change. There are many governance challenges associated with nurturing a healthy project and community. Intentionally removing economic levers, such as arbitrary adjustments to monetary policy, makes the problem tractable.

The native coin of Spacemesh is called Smesh. The network produces a new layer containing a new set of blocks every few minutes. The first layer will issue 547 Smesh coins to the miners that participate in the layer, and from there, issuance will fall very gradually over time. The total amount of coins to be issued is 2.4bn. After about 29 years, half of those coins will be issued; issuing the second half will take the next 848 years. The last full Smesh coin will be issued 266 years after genesis, around 2288; and the last Smidge (one-billionth of a Smesh) will be issued around the year 2899.

Spacemesh issuance is 100% transparent, predictable, stable, and unchanging. At every moment, it will be totally clear how many coins have been issued, and this number can easily be calculated and verified.

In the name of transparency and accountability, it’s very important that the entire community understands how the project’s earliest supporters are compensated. The most important thing to know is that, as described above, Spacemesh does not have a traditional premine: on the day the network goes live, and for the first year thereafter, zero coins will be issued to early supporters. The only coins in circulation and tradable for the first year are those that were mined permissionlessly by Smeshers.

All of the coins granted to early supporters are subject to a four year vesting schedule. At the launch of the network, we will lock 150M coins into smart contracts called Vaults that are owned by the project’s early investors and core team. These coins will begin to vest after one year. For the following three years, these coins will slowly unlock, and they will be fully vested and spendable at the four year mark.

Ten years post-genesis, these coins will represent 25% of total issuance up to that point. Since issuance will continue for a long, long time after that, this share will eventually fall to 6.25% of the supply cap.

As with Bitcoin and other decentralized, open source, community-driven projects, the ultimate direction of the Spacemesh project and platform are in the hands of the community. As the project’s progenitors, we feel that it’s critical to set initial parameters that give the network the greatest possible chance of long-term success and value creation. Governance is a complex topic and one that we take very seriously. We’re excited to work with the community to develop a system of governance that’s as transparent, accountable, inclusive, and sustainable as possible. We strongly believe that, whatever governance model eventually emerges, it will be possible to work productively, constructively, and inclusively within the bounds of this economic model.

If you’re interested in Spacemesh economics, or in governance more generally, we encourage you to join our Discord server and reach out on the #smesh_economics channel.

Video Introduction to the Spacemesh Protocol 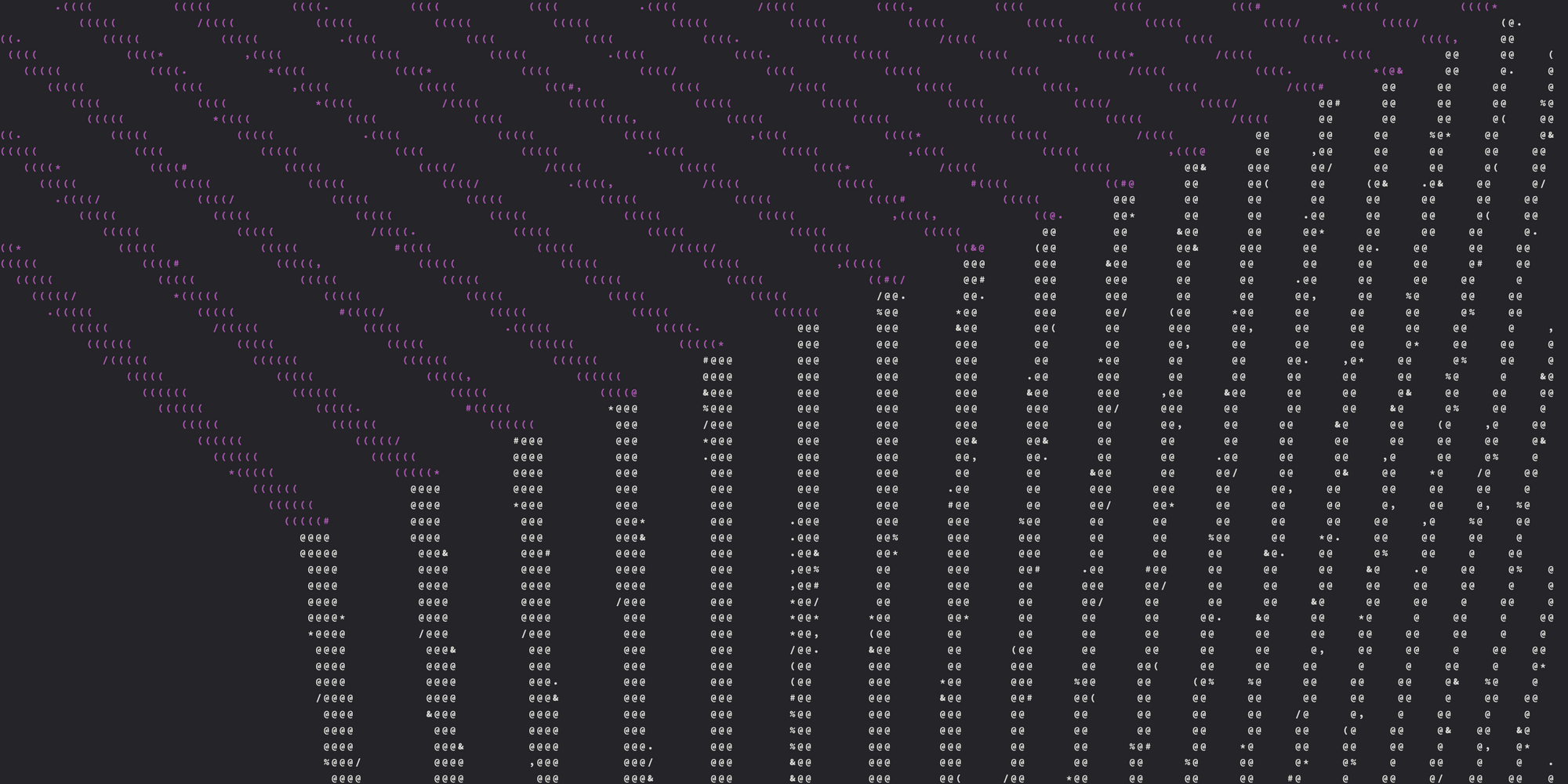